It’s very hard to believe that one year ago today on July 16th I moved from my hometown of Philly to New York City! I could go on and on about the journey to get myself here, or about all of the crazy things I’ve seen since I’ve moved here. I’ll save that for another blog post. 🙂 For the most part things are chill. But what I will say is this place isn’t called “The city that never sleeps” for nothin’! I can only be grateful for the blessings and stay as positive as I can. I started a new job, I live in a cool Brooklyn neighborhood, I’ve met new people, reconnected with friends, partied, turned 30! So much greatness has happened and I’m excited for more.

This isn’t to say I haven’t faced any challenges, because I have, MANY in fact. As a new teacher in NYC I had to adjust to lots, and of course outside of work. Being an independent woman can be rough, but mostly it’s just apart of me growing up.

Here are 5 things I have learned thus far. Trust me, this list could’ve been a lot longer. I mean how could I limit myself, this IS New York City. There’s always plenty to learn and discover. But for me, this is what I have figured out!

Living on the 4th floor of my apartment building isn’t the easiest task. Specifically when climbing UP the stairs with laundry, or groceries, or just dragging my tired self up the stairs after a long day at work. It ain’t easy! So, a key takeaway before I leave out of the door for any period of time I make sure I have what I need before I leave out the door. I live in Brooklyn and most times I’m going into the city of Manhattan so I definitely like to make sure I have what I need. I admit there were some days during the last year of living here that I forgot SOMETHING.

One day after leaving for work at 5am I got all the way to the train platform to realize I didn’t have my bank card OR my ID! I remembered in the moment that I had taken the cards out of my wallet the day before and clearly forgot to put them back. After taking the 6 minute walk to the station, in my head I’m like, “Damn!” I didn’t even go back home. The thought of going back and climbing those stairs made me cringe. Just yesterday once again going to the train station, I realized I had forgotten my headphones, which is a like a train rider’s nightmare! Especially for me, they come in handy to tune out the New York noise. Word of advice for the NEW New Yorker, before leaving out the door make sure you have yo’ stuff!

It’s no surprise that New York is a very expensive city. So I have learned to buy in bulk when it comes to buying things I need like toiletries, sometimes food (depends), and hair supplies. Also, hand soaps, paper towels. I sometimes buy two of those items or buy it in a pack if it comes that way. More so I do this with my toiletries so instead of one toothpaste or body wash I’ll buy two, or a food item that I know I use a lot. This keeps me from always having to go to the store and it helps to have a back up of something you use frequently.

Also, I must add that utilizing small spaces is essential. Most New York apartments are small and you have to learn to adjust to smaller rooms, closets, kitchens, etc. I fortunately have a nice sized apartment but my room isn’t exactly huge. However, I have done my best to utilize and work with what I got! A year later I would like to change some thing’s around, possibly get some shelves on the wall, I have lots of wall space.

Here’s a photo of when I first moved in and decorated. The last photo was taken a few days ago this July of 2017. 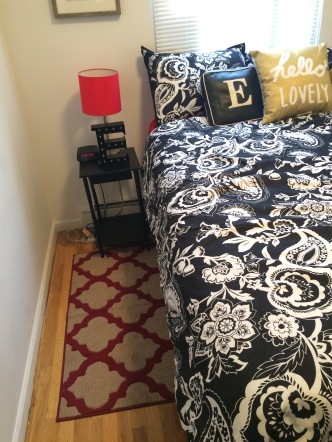 I have done my best thus far to stay true to myself since moving here and be humble. For someone like me who has dreamt of living here since I was a kid, and worked so hard to get here, I don’t take it for granted. I am very thankful to have the opportunity to have a great job, and have a home to live in. Nothing in this experience should warrant me the attitude to feel I am above anybody. I am proud, but not arrogant. I think you have to stay true to yourself but also don’t get too caught up in the bright lights and fast paced atmosphere of NYC. If you moved to a new city recently or began a new journey, being humble I think is the best way to be. I get up, go to work, mind my business, have fun, and learn. So be grateful for what you have and like Kendrick Lamar said, “Sit down, be humble.”

This piece of advice may be a no-brainer but as a commuter on the MTA, you really need to be vigiliant. Too often I see people whether they are native New Yorkers are not, they are too “unbothered.” I can be on the train and notice things and people are either on their phones or not giving a damn what’s happening around them. I am not saying I’m all stealth and commando on the trains or walking the streets, BUT I really try to be aware of my surroundings. One morning on the train platform a guy clearly on drugs tried to steal from another man and they began to fight. In this moment I was looking at my phone! Once I realized what was happening I put my phone away, and steered clear from the altercation. I mean you can’t see it all, but what I know for certain in living here, pay attention.

As quickly as I moved in last July of 2016 I quickly started work after 2 weeks. With that being said a lot of my everyday life as a teacher was spent inside a classroom, and the days were long. I would say exploring the city is something I have learned to do since moving here. Now that I am on my summer break from work it’s an even better time to see the city! From theater shows, bar hopping, going to museums, or simply taking a stroll in Central Park. It has been imperative that I branch out and see this great city in all of it’s dirt, craziness, history, and never a dull moment that it offers. I don’t have a checklist of “things to see,” I just go with the flow most times and explore. Some days I have to remind myself, “You live here now.” 🙂 So I realize that I don’t always have to rush and see things all at once. I mean how can you? New York City has so many gems and things to discover, and that’s what’s so great about this city, at least for me. Every new day is just that, something new.

Here’s to many more memories, and new beginnings in the craziest, sometimes loudest, weirdest, never sleeping, most awesome city that I know! Cheers.

From my heart to yours,

This site uses Akismet to reduce spam. Learn how your comment data is processed.